Today after work I didn’t feel like staying indoors so I went back to Pinafore Park in St. Thomas to visit momma raccoon and her babies. I parked my car close to the tree where I had seen them on my two previous visits and waited for them to make an appearance. Finally after awhile one of the baby raccoons decided to come out and sit near the top of the tree right above the opening of their den.

It took a look around before nibbling at its paw for a few minutes after which it seemed to realize that I had been watching it and taking its picture. I waited for a little bit longer to see if the other babies and momma were going to come out from hiding but it soon became clear that only one the babies was eager to get up and start moving around.

I moved along the fence a little bit to get a better view of the opening of their den inside the tree and noticed what appeared to be momma raccoons head sticking out a little. The baby raccoon that had already woken up decided that it wasn’t happy about momma sleeping and sat directly on top of her. It then took its little paws and began to push against momma’s head hoping to get her up.

After trying unsuccessfully to get momma raccoon up, the baby raccoon appeared to give up and head back inside their den to sleep some more. I stuck around for a little while hoping that momma would get up and her babies would follow but unfortunately no such luck.

Below are the photos I was able to capture of the baby raccoon sitting in the tree and pawing at momma raccoon’s head. 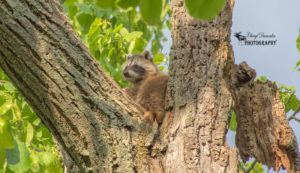 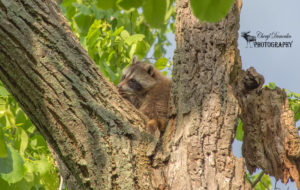 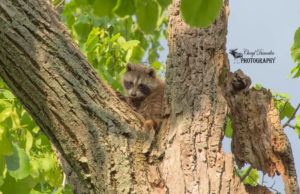 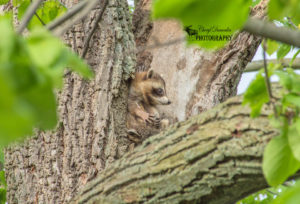 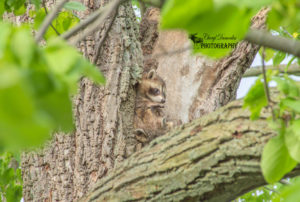