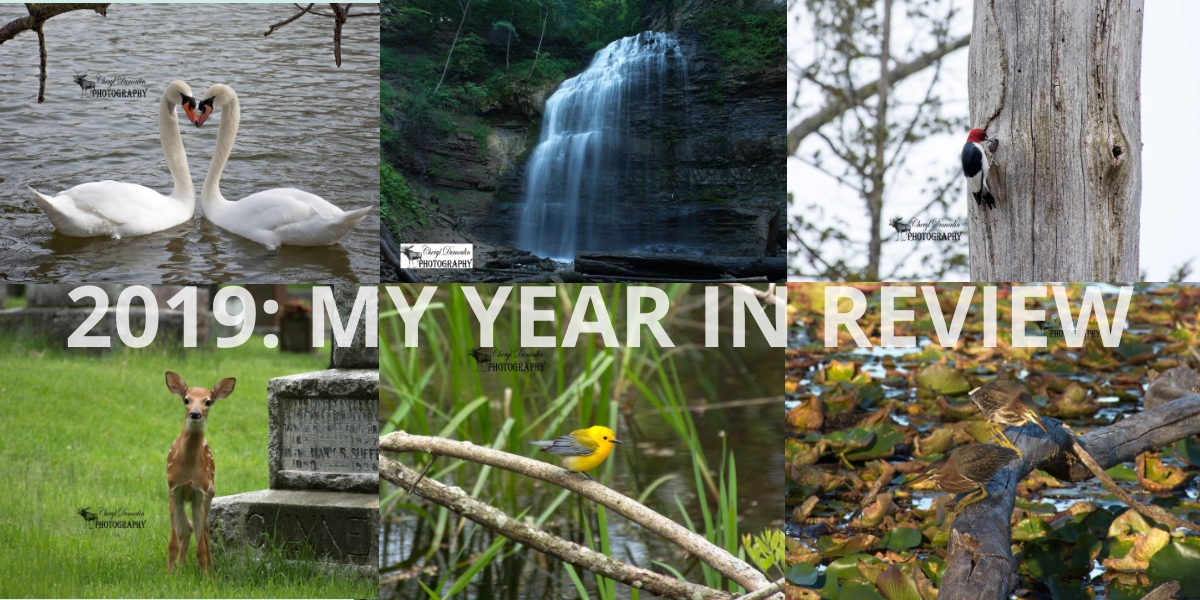 As I look back on this year, I am so very thankful for all the memories I created. So many amazing moments captured and fantastic places visited. I truly am blessed to be able to do what I love and share that with so many people.

At the beginning of the year, I photographed my first male wood duck, which made an appearance at a local park. I observed its interactions with a female mallard duck which it stayed very close to.

In Woodland Cemetery, I watched a pair of Great Horned Owlets from their birth to fledging. It was an incredible journey to witness these two little ones grow each day.

The Stratford Swan Parade is a wonderful annual tradition where the Mute Swans are returned to the Avon River. It was there that I captured the courtship ritual of a mated pair forming the shape of a heart with their graceful necks.

During the spring migration, I visited Point Pelee National Park, Pinery Provincial Park and Rondeau Provincial Park. I spotted my first Red-headed Woodpecker at Pinery and got my best photo of a Prothonotary Warbler at Rondeau.

In the summertime, five white tailed deer fawns were born to the family of deer in Woodland Cemetery. I was able to photograph all five of them shortly after they were born. They only keep their trademark white spots for a couple of months.

In August, I travelled to Hamilton, which is known as the City of Waterfalls. Tiffany Falls was definitely the highlight of my visit. I was able to capture the beauty of this popular destination after patiently waiting for an engagement shoot to finish.

When autumn arrived, I took my lensball out and had some fun taking some different kinds of photos. It is a photography tool that gives you the ability to capture an inverted image inside of a sphere.

As the fall season was coming to an end, I took a final hike at Westminster Ponds Conservation Area. It was on that hike that I spotted a pair of green herons and was given an amazing opportunity to photograph them together.

The highlight of my entire year, however, was getting published for the first time. I was contacted through email by the editor at Our Canada magazine. She let me know that one of my images had been selected for their September issue. I provided them with a brief write up which would accompany my photo. I was truly honoured to have my image appear in a National publication.

2019 was another great year for my photography. I am looking forward to seeing what I will accomplish next year. Thank you for the continued support of my work. Stay tuned !!

Published for the first time !!